The examples in the generators section have numerous examples on how to generate artificial images, but ultimately most people will be working with real images obtained from X-ray tomography or serial sectioning. This tutorial will cover a few different aspects about how to open these images for using a Jupyter notebook, or a Python workflow in general.

Let’s import the packages and functions that we’ll be needing:

ImageJ is the ultimate image processing tool kit. It has many functions and filters for doing quantitative analysis, usually added via plug-ins (see note below), but it’s also very good at converting between file types and formats.

If you have a folder full of 2D images which are either microscope images obtained by serial sectioning or reconstructions of backprojections from X-ray tomography, then you’ll want to convert these into a single tif image. tif supports 3D images, so all the individual 2D images can be stacked together into a single file.

This can be done in ImageJ using “File/Import/Image Sequence” as shown in the screenshots below. Note that the images must be named with a numerical value indicating its order in the sequence, like “slice_001.tif”. 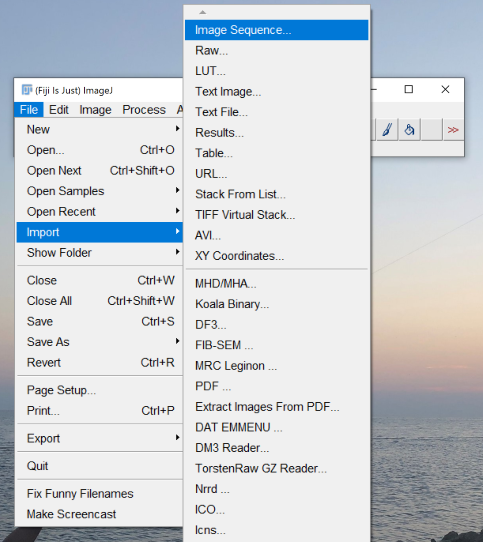 A dialog box will appear asking you about some of the details, which are usually correct by default: 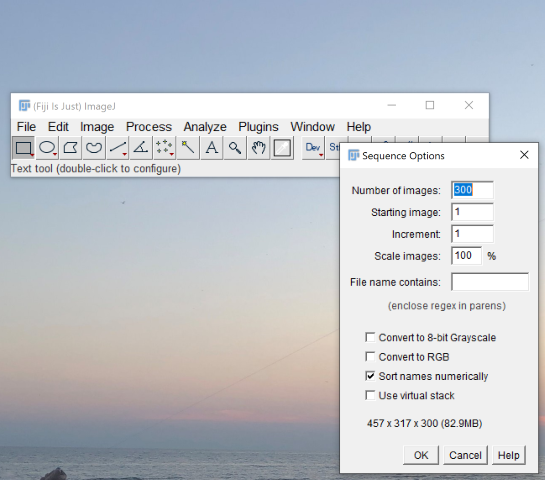 Finally, you’ll want to save this new 3d tif image, which can be done with “save as”: 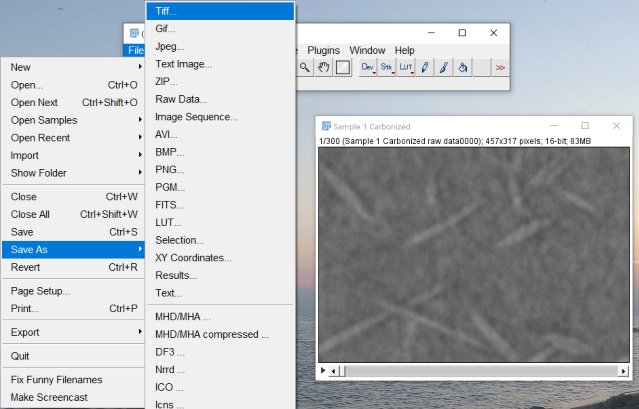 ImageJ has a plugin architecture to add functionality. At some point it was realized that most users install numerous plugins, so Fiji was created, which is ImageJ with a large selection of the most popular plugins preinstalled. The name Fiji is actually a recursive acronym for “Fiji Is Just ImageJ”

If you’d rather not get manually involved, then it’s also possible to do this in Python. The scikit-image package comes with a handy funciton for just this purpose. It only takes a few minutes to get used to how it works:

Now let’s inspect the result. We can see a list of files loaded in the files attribute:

And we can access the loaded images from the seq object as if it were a list:

We can convert this list into a 3D image as follows:

And now we can use porespy to visualize it:

In this tutorial we will not do anything to clean or denoise these images, as that deserves it’s own tutorial. Here we’ll just apply a threshold to convert a boolean with True indicating solid (the fibers above) and False indicating void.

First we need to look at the range of values in the image:

From the above histogram we can see that the values span from 22000 to 34000. We can just search for a value which does a decent job of segmenting the solid and void by trial and error:

Because the image is noisy the result is not perfect. But let’s apply this threshold to the entire image now, then visualize the 3D stack:

Assuming that the 2D images have been turned into a 3D image, as described above, it is straightforward to load them:

Once you have created a nice image that you want to save, perhaps for visualization in Paraview, you can also use the imageio package: